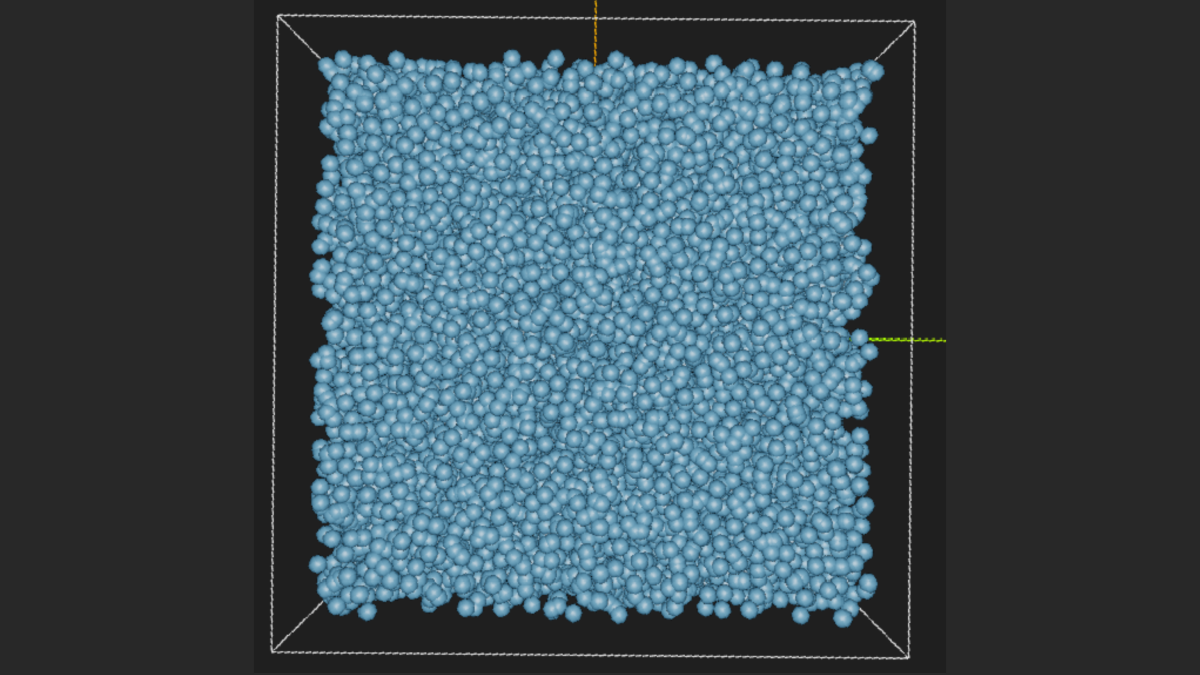 In a collaborative project, a University of Wisconsin–Madison Department of Chemistry graduate student took a local software company’s product into some unchartered territory. Experimental results in the simulation of 3D random lasing from the year-long project helped show the strengths of very fast software in the research space while highlighting areas of focus for future products. Brandon Hacha, a graduate student in Dr. Randall Goldsmith’s group, collaborated with Momchil Minkov, a scientist at Madison-based Flexcompute, Inc. to design and execute experiments with the software.

With the goal of using newly developed photonics software, Tidy3D, to simulate random lasing in 3D systems, this project was funded by the University of Wisconsin Advanced Materials Industrial Consortium (AMIC) as part of the organization’s seed program and was supported with in-kind contributions from Flexcompute.

“The jump from simulating 2D processes to three dimensions requires orders of magnitude higher computing power. This is something Tidy3D is designed to provide,” said Minkov.

“It was surprising just how little these systems have been characterized previously,” said Hacha.

The benefits of collaborating with an industry partner were seen beyond this project when Hacha and others in his lab we were able to incorporate the Tidy3D program into other ongoing research on photonic crystals.

“Our recent publication in ACS Photonics, ‘Three-Dimensional Printed Planar Polymer Photonic Topological Insulator Waveguides and Their Robustness to Lattice Defects’ featured the results of over 4000 different simulated structures using Tidy3D. This took less than a week, which would not have been possible before we became familiar with this software,” said Hacha.

Additionally, Flexcompute has identified potential improvements for the Tidy3D program. One example is making material objects that can be placed in the simulation capable of being placed at arbitrary angles.

As leader of the project, Hacha gained experience in proposal writing, budgeting, and project management.

“I learned a great deal about managing projects as a result of this AMIC collaboration,” said Hacha. “As a graduate student, I almost exclusively find myself on projects that are managed by my principal investigator or collaborators, and it was extremely beneficial to see things from the other side.”

AMIC Seed projects are conducted by an individual or a small team of UW–Madison graduate students and/or postdocs who are advised by a faculty member. For these young researchers, the goal of the AMIC Seed program is to provide experience working with an industrial partner on a project, from defining the problem and creating a proposal to meeting project milestones, managing a budget, and creating reports.

“During graduate school, I have used multiple brands of simulation software, each with its own strengths and weaknesses. Tidy3D is certainly the fastest for solving this type of simulation. In addition, working with Momchil also meant it had the best customer support,” said Hacha.

For participating companies, the AMIC Seed Program provides a rare opportunity to explore scientific questions while building collaborative relationships with promising young scientists and engineers. The proposal ideas originate with AMIC member companies, who submit research topics of interest. These ideas are then developed into proposals by students and postdocs working in collaboration with the companies’ own scientists and engineers.

ABOUT THE UW AMIC

The University of Wisconsin Advanced Materials Industrial Consortium (AMIC) is a group of industrial and academic members created to leverage the broad spectrum of materials science resources and capabilities found in both the university as well as corporate settings throughout the region. AMIC does this by promoting synergies between materials researchers and technologists, facilitating access to personnel and infrastructure, enhancing student experiences with industry for professional development, and facilitating recruitment of a strong and diverse regional network of industry-based materials researchers. The UW AMIC is led by the Wisconsin Materials Research Science and Engineering Center (MRSEC).

Flexcompute is an early-stage technology startup that develops ultra-fast simulation technology to help companies to design and optimize technology products. Its products are used to design airplanes, cars, wind turbines, and quantum computing chips. The customers include household names as well as startups in emerging industries.